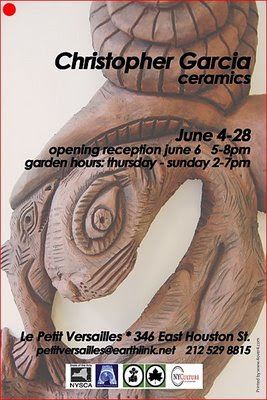 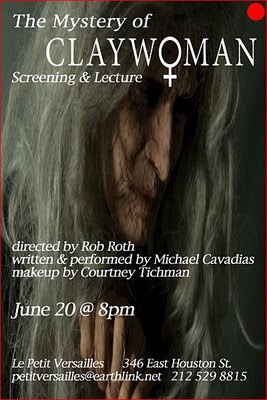 JUNE 20 @ 8pm
The Mystery of Claywoman
Screening and Lecture
After sold out performances at Deitch Projects, The New Museum for Contemporary Art and most recently opening for Antony and the Johnsons at Town Hall, Claywoman returns for a one night only performance at Le Petit Versailles. This latest performance blossoms new themes, ideas and characters in an outdoor garden on New York City’s Lower East Side. A screening of The Mystery of Claywoman (featuring Alan Cumming , Justin Bond, Debbie Harry and Amy Poehler) is followed by a lecture touching on subjects that involve our fragile planet and our evolution as a relatively new species.
Described by Paper Magazine as “Funny, uncomfortable and depressing – in that order.” , as well as Michael Musto calling the film “wildly witty” , this next incarnation of the mystery that is Claywoman should be eye opening for all.

The Mystery of Claywoman – Screening and Lecture’ is written and performed by Michael Cavadias and directed by Rob Roth. Utilizing live performance and film, the piece combines the forms of a documentary screening and lecture to actualize the story of Claywoman, a 500-million year old enigma who, legend has it, can cure anyone of their deepest pain.

Le Petit Versailles is a NYC public community garden in the East Village that presents a season of events including art exhibitions, music, film/video, performance, theater, workshops and community projects from May – October.
LPV is a project of Allied Productions, Inc., a non profit arts organization. http://alliedproductions.org
LPV events are made possible by Allied Productions, Inc.,
Green Thumb/NYC Dept. of Parks, Materials for the Arts; NYC Dept. of Cultural Affairs, NYC Dept. of Sanitation & NYC Board of Education.
Film & Exhibition support from The New York State Council on the Arts, a state agency.
Additional support, in part, by public funds from the NYC Department of Cultural Affairs.
Exhibitions
Please Share This