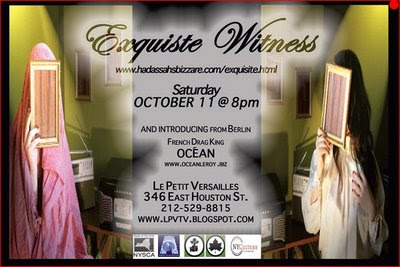 In Between Stories of yes, no, maybe or not?

Exquisite Witness-
We are the stories we remember, without adherence to fiction or truth. But without a Witness,are some of these stories incomplete? Are we therefore incomplete?

Exquisite Witness is a live theater spectacle involving two performers who blur the boundaries of identity by evoking multiple personas in succession in an attempt to relate previously untold fictional histories. The piece will be a combination of storytelling, theater [monologue & dialog], original soundscape, and inventive costuming made up of about 15 short stories.

The audience will be invited to bear Witness to these histories, thereby completing the cycle of call and response necessary for the affirmation of individual experience through outside acknowledgment or community witness. Each story depicts a discrete and consequential moment in the lives of characters (real or imagined) that lacks completion until told. The performers take it upon themselves to be the catalyst for this exchange and subsequent closure.

The content ranges from the absurd to the mundane to the obscene: a chance encounter, a suicidal poisoning, a failed relationship, a craigslist ad, and so forth. We currently have four completed and several in-progress pieces.
As this work-in-progress unfurls, we are creating a series of vignettes, which when woven together ultimately reveal the human need for validation.

Océan -
Océan was born and raised in France, before living in London and studying in Paris, Oxford and Berlin. First contact with the arts with Music (award-winner of the Madeleine de Valmalète Piano Competition), then Dance (Tanzfabrik Berlin), and underground Theater (Theater Westöstlicher Divan, Berliner Ground Theater), Océan had his/her stage debut as a drag performer at the Go Drag! Festival with Diane Torr and Bridge Markland in 2002. Having taken acting, singing and scriptwriting classes, Océan is famous for his multimedia-performances involving video-clips and dia-show projections, choregraphy, live singing and poetry slam. He was nominated as “most influent personality” at the last Mix! FilmFestival in Brazil, and won in July 2008 the international Kings VILLAGE Contest in Rome, Italy, convincing a professional jury of journalists, film makers, singers and actors. Océan also acts in a few short films in various men or women characters, including “Lost in Generations” and “Fucking Different Tel’Aviv”. Currently on the road, Océan is accompanying the international festival tour of the documentary film “Risk, Stretch or Die” (Saskia Heyden, 2007) about his transgender life.

Am I simply a drag king? Not sure… I strongly identify as a transgender performer. For me the most important is not the trash and fun factor, but to go to deeper levels and bring some real stuff on stage, issues like the 3rd sex, trans* families, kings eventually turning gay, homo- and transphobia, but also more and more general social issues like war, violence,lookism, and that crazy speed of life…

What the media say about the film Risk, Stretch or Die…

Thought-provoking and intelligent, this poetic documentary dissects gender identity by aiming its lens at an electrifying individual who is a successful businesswoman by day and a popular drag performer by night. Set against the avant-garde backdrop of Berlin, Risk, Stretch or Die is a compelling look into the fascinating life of gender-bending, famed French drag king Océan LeRoy. Transgender identified, Océan refuses to abide strictly by a male or female label. During business hours, the dual-natured dynamo manages a media and technology consulting firm as a woman, finding it easier to play by the rules of business in this prescribed role. But when night arrives, the chameleon emerges full tilt as a suave and dapper male. Hitting the stage as a man and a woman, the innovative entertainer performs a broad range of passion-charged numbers, from poetry slam to hardcore punk rock loaded with political statements, often pushing the audience outside their comfort zone. This documentary is not merely about a drag king; it delves deeply into a different and more fluid perspective that shatters conventional notions of gender. Told in a lyrical tone with a keen visual eye, director Saskia Heyden unveils the core of this fascinating figure and beautifully captures an androgynous person who outwardly defies masculine and feminine constraints.

LPV events are made possible by Allied Productions, Inc.,
Citizens for NYC, Green Thumb/NYC Dept. of Parks, Materials for the Arts;
NYC Dept. of Cultural Affairs, NYC Dept. of Sanitation & NYC Board of Education
Film & Exhibition support from The New York State Council on the Arts, a state agency.
Additional support, in part, by public funds from the NYC Department of Cultural Affairs.

In honor of Women's Month,  Mother's Day and all things Goddess and blossoming of Spring, Petit…