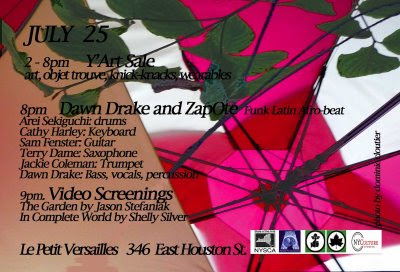 Original dance music simmering in a palate of serious Latin, African and Caribbean rhythms.
Taking its name from a luscious fruit in Cuba also known as “mamey”, “ZapOte” is an original Funk Latin Afro-Beat band lead by Dawn Drake, New York’s female bassist/conguera/singer/songwriter and composer, who manages to wear several hats while setting the scene with her own brand of cool.
Her original music takes the listener and dancer into a zone where House, Funk, Afro-beat, Samba, and Afro-Cuban rhythms are right at home. Her poetic lyrics spread messages of universal consciousness, love and are delivered with an occasional ironic twist.  She is joined by amazing musicians playing the irresistible grooves of Latin percussion, swinging hornlines and virtuosic improvisation.

&
In Complete World-
Shelly Silver
53 minutes, 2008
http://www.shellysilver.com/view.php?id=video&id2=incompletev
in complete world is a feature-length documentary made up of street interviews done throughout NYC. Mixing political questions (Are we responsible for the government we get?) with more broadly existential ones (Do you feel you have control over your life?), the film centers on the tension between individual and collective responsibility.
The film can be seen as a user’s manual for citizenship in the 21st century, as well as a glimpse into the opinions and self-perceptions of a diverse group of Americans. It is a testament to the people of NYC in this new millennium, who freely offer up thoughtful, provocative and at times tender revelations to a complete stranger, just because she asked.
LPV events are made possible by Allied Productions, Inc., Green Thumb/NYC Dept. of Parks, Materials for the Arts; NYC Dept. of Cultural Affairs, NYC Dept. of Sanitation & NYC Board of Education.
Film & Exhibition support from The New York State Council on the Arts, a state agency.
Additional support, in part, by public funds from the NYC Department of Cultural Affairs.

JOIN Us on Saturday July 29th for an evening with visiting artists YSEULT DIGNAN, REINALDO…