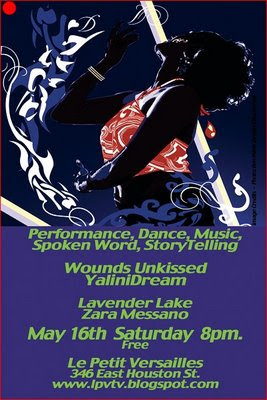 In honor of Women’s Month,  Mother’s Day and all things Goddess and blossoming of Spring, Petit Versailles Garden begins their Season 2009 performance series with two amazing amazons that tear at the flesh of issues affecting women around the world.
Spoken word, dance, live music, storytelling.

Saturday   May 16th  @  8pm.
“Wounds Unkissed”  by YaliniDream   with Songstress Chaney Sims & Singer/Guitar Player Ranjit Arapurakal
and
“Lavender Lake”  by Zara Messano
Wounds Unkissed  by YaliniDream
In Wounds Unkissed, YaliniDream incorporates her interdisciplinary approach in a performance that speaks to the survival of spirit. This vigorous performance travels thru many spaces from the humorous conflict of a young girl’s dilemma between sexy thoughts and bedtime prayers to a mother coming to terms with her daughter’s sexuality & community’s contradictions to the heart wrenching stories of the ethnic conflict in Sri Lanka.  YaliniDream journeys this terrain through a hybrid form of dance that draws upon contemporary and classical South Asian forms as well as US Urban dance forms such as Popping, Hip Hop, and Experimental House.

Lankan Blood, Manchester Born, Texas bred and Brooklyn steeped, YaliniDream is a Sri Lankan Tamil raised in outside lands. She conjures spirit through her unique blend of poetry, theater, song, and dance: “Sick of bouncing between in betweens, I live in the borderlands where poetry is theater is love is movement is song is prayer is rebellion. I look to reshape reality seeking peace through justice in the lands of earth, psyche, spirit, and dream.”

Using the inherently didactic overhead projector, images created from inks on acetate and cut-out paper silhouettes are projected to tell a story. The story retells and manipulates a combination of myths from diverse cultural origins to subvert sexist tales of creation and instead give agency to female characters in mythical narratives. This tale follows the a woman who is repeatedly raped by a man in varying bestial forms and escapes by cutting herself into three pieces, which become three identical sisters. These girls live by a lake dyed lavender with blood, whose tears grow mutant trees and who have visions of a visceral future. By the end, a spider appears but is killed in one slap–a reversal of the fleeing woman from the story’s start. Along with these images music/ambient sounds play, and the audience tells the story aurally through visually prompted cards. Thus, we are all in the story together.

Zara Messano is an interdisciplinary artist working with performance, projection, film/video, installation and printmaking to create works that challenge narrative conventions and social assumptions about the lives and presentations of women. She attends Sarah Lawrence College, concentrating in film history, visual arts and women’s history; BA expected 2009. She has exhibited at Sarah Lawrence College and Monster Island in Brooklyn, NY, and is the co-founder and co-editor of Taffy Hips Magazine, which publishes comics, art and interviews with artists. She currently lives and works in New York, NY.

LPV events are made possible by Allied Productions, Inc., Green Thumb/NYC Dept. of Parks, Materials for the Arts; NYC Dept. of Cultural Affairs, NYC Dept. of Sanitation & NYC Board of Education.
Film & Exhibition support from The New York State Council on the Arts, a state agency.
Additional support, in part, by public funds from the NYC Department of Cultural Affairs.
Please Share This