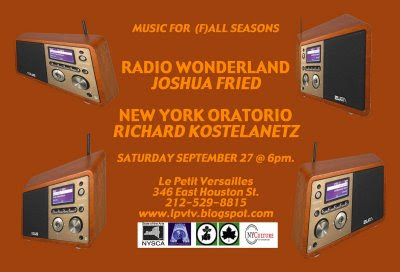 RADIO WONDERLAND is me, Joshua Fried, performing solo live sound
processing controlled by old shoes I drum on with sticks (I’m a
drummer) and a steering wheel (I’m a, er, wheel player).

All the sounds originate from an old boombox, playing radio LIVE.
Nothing is pre-recorded; anything picked up during the
performance is fair game until the end. All the processing is
live custom DSP programmed by me in the MaxMSP programming
environment. But I hardly touch the laptop. My controllers
really are a vintage Buick steering wheel, old shoes mounted on
stands, and some gizmos. You’ll hear me build grooves, step by
step, out of recognizable radio, and even UN-wind my grooves back
to the original radio source.

I walk on with a boom box, playing FM radio LIVE. Once onstage,
I plug it into my system and start slicing up radio. I arrange
those slices both rhythmically, and, by playing them at different
speeds, melodically as well, all according to what I hear. I
call this process the RE-SHUFFLER. With another algorithm, which
I call my RE-ESSER, (studio nerds will recognize this as a joke
on de-esser), I isolate the sibilance, so I can compose on the
spot with those S, T, K, Sh, etc. sounds, just like programming a
drum machine. The ANYTHING-KICK uses FFT-based cross synthesis
to morph a bit of radio in the direction of a kick drum.

The sum total is dance music. I ham it up like mad, using the
theatricality of the shoes and wheel. It’s great fun, and more
musical than the video suggests. Every show is rather different,
naturally, because the source material is entirely different each
time.

So what’s it all about? What is the art-speak that goes with
RADIO WONDERLAND? I want to show that we ALL can interrupt and
interrogate the never-ending flow of commercial media. So my
transformations, taken individually, must be clear and simple–
mostly framing, repeating and changing pitch–although when
everything is put together it does end up complex. My controllers
are simple too: the wheel merely a knob to take things up and
down (frequency, tempo) or play radio loops like a turntable, the
shoes just pads I hit softer or louder. The surreal quality of
using such ordinary objects underscores the absurd disconnect
between digital controller and sound, as well as the congenial
nature of the aural transformations themselves. So, too, my riffs
must be vernacular and not elite. (We need the funk.)

The New York Oratorio – Richard Kostelanetz
—statement excerpt—
As a native New Yorker, who has
lived here my entire adult life (and dislikes
leaving it, even for an afternoon in “the coun-
try”), I have always treasured and even writ-
ten about the literature and art of my home
town, most recently in SoHo: The Rise and
Fall of an Artists? Colony (Routledge, 2003).
Nonetheless, it seems to me that though the
greatest books appear to capture much of
New York City, the place still evaded as well
as exceeded the capacities of either authors?
imaginations or their medium. Not only was
too much left out, but one recurring problem
apparent to me is a failure to acknowledge
how unprecedented and how extraordinary
this City was–how it has become a kind
of second nature that had all the coherence
and comprehensiveness of primary nature
and yet was completely apart and different
from it. Too many authors in writing about
New York seemed too eager to connect it to
something old, such as birds and trees–to
see the old in the new–rather than accept the
city as a wholly unprecedented environment.
Appreciative of this New York literature,
yet aware of its inadequacies, I had come
to regard New York City as one of the most
fertile and challenging subjects for art.

My ?rst thought, which seems ever
more odd in retrospect, was to write out of
my own head a New York replica of Dylan
Thomas?s Under Milk Wood (1953), which
survives in my memory as a model warm
evocation of one?s home town. I conceived
of indigenous characters and outlined char-
acteristics of their speech; but once I tried to
write their lines, I realized the futility of this
approach. The trouble was not just that the
languages of New York are not as univer-
sally appealing as Welsh English; I cannot
write like Dylan Thomas and, though awed,
would not want to. Moreover, the more I
thought about Under Milk Wood, I realized
that it represented the climax of a certain
period of creative radio, when most shows
were done live (or initially in live time, even
if they were recorded for later broadcast),
because the only recording technology
available at the time was wire that, though
it could but cut, could not be reconnected
without leaving an audible noise. Working
thirty years after Thomas, I had necessar-
ily become familiar with audiotape editing
and multitracking; so I decided that instead
of writing my New York City on sheets of
paper, it would be more appropriate for me
collect the materials of my piece–to gather
those sounds that make New York City
audibly so different from everywhere else
in the world. From the elements of this col-
lection I would then compose, along certain
principles suggested not only by the mate-
rial but by my knowledge and experience of
the city, a kind of symphony that would, like
Under Milk Wood, be a warm radio portrait
of one?s home town.

LPV events are made possible by Allied Productions, Inc.,
Citizens for NYC, Green Thumb/NYC Dept. of Parks, Materials for the Arts;
NYC Dept. of Cultural Affairs, NYC Dept. of Sanitation & NYC Board of Education
Film & Exhibition support from The New York State Council on the Arts, a state agency.
Additional support, in part, by public funds from the NYC Department of Cultural Affairs.

SEPTEMBER 14 – Lydia Eccles: As A Person, I Must Start From Scratch